The Danube Delta Biosphere Reserve is probably the wildest territory in Europe. It is the 3rd largest Bioshpere Reserve in the world and hosts more than 5,500 species of flora and fauna. The Danube Delta is a paradise for wildlife enthusiasts and those who enjoy wildlife photography, being larger than Mallorca Island, but with more than half of its territory still intact. At the West of the Danube Delta, the oldest mountains in Europe, the Macin, are waiting to be discovered. Local life is a mosaic of culture and civilization, as this place has been visited throughout the ages by Greeks, Romans, Turks, Russians, Tatars, Italians, and other civilizations. Visiting the Dobrogea region and the Danube Delta should be one of the most interesting experiences in Europe for a tourist.
We invite you on a journey to a unique natural place where you will also experience the local culture, cuisine and lifestyle.

Prices are per person.
For groups with more than 15 participants, the price will be calculated according with the number of participants. 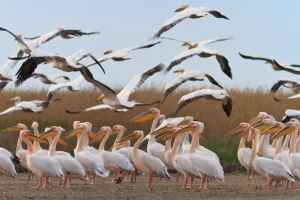